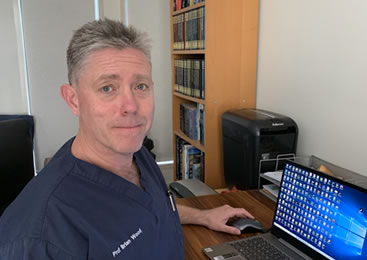 Professor Wood completed his medical degree at the University of Aberdeen in the UK. He trained in Geriatric and General Medicine in the North East of England (including a fellowship in Sydney). He underwent a 2 year teaching and research fellowship studying falls in Parkinson’s disease obtaining a doctoral degree.

He became a Consultant Physician and Geriatrician with an interest in Parkinson’s disease in Northumbria in 2002. He developed a large Parkinson’s disease service looking after over 600 patients at any one time.  In addition he had major interests in medical management and the management of education. He became Director of Training of the Royal College of Physicians of Edinburgh and Director of Specialty Training in Health Education England.

In 2016 he emigrated to Queensland with his family and became a Senior Staff Specialist at Redland Hospital; along with maintaining an education interest, becoming a Professor at Griffith University and having several roles with the Royal Australasian College of Physicians.

Professor Wood is now taking referrals at Redlands Specialist Centre. He does not do any private inpatient work.